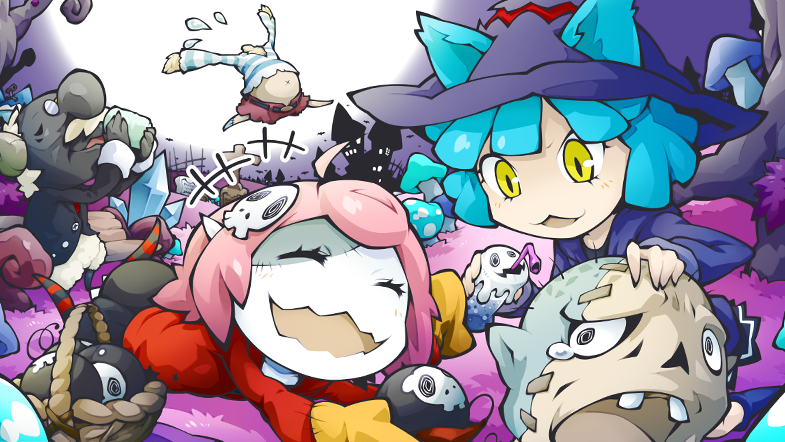 Game Introduction
My Lady, congratulations on becoming the new Demon King
In this RPG, you play as “Ardy”, the apprentice Demon King and battle humans!
The monster line up, ranging from creepy to pretty, is waiting for your command!
Combine equipment and super powers to create your own party.
With simple controls, the battles are really smooth!
Your role is to command your monsters, which automatically fight with humans.
– Attack!
– Heal!
– Use a special attack, which triggers a short rhythm game!
Humans drop gold and materials after being defeated!
You can use the gathered materials to forge weapons and armors for your monsters.
Equipped weapons are actually displayed during the fight, so make sure to forge them all!
Progress through the story and enjoy the funny (and sometimes sad) “dialogue scenes”!
Experience conversations full of top notch comedy and parody.Let’s not forget about the Monster Synthesis!
After synthesizing a group of the same monsters enough times, one of them will evolve into a monster of the higher rank!
All monsters have the “Super Rare” rank, so you will be able to advance your favorite monster all the way to the top.
Gather monsters and become the supreme Demon King!
Story
Demon Kingdom without a Demon King.
The previous Demon King, “Ilutebaq” was defeated during the war with humans…
A few hundred years without a Demon King…
Refugees who were able to run to an uncivilized land at the end of the world had a lot of time on their hands.
Without a Demon King as their leader they attacked humans when they had a chance, but were beaten every time.
Seeing all those careless demons, the butler of the former Demon King – “Thyne” proposed a General Election.
Luckily, there were quite a lot direct descendants of the Demon King.
So a new Demon King would be chosen from them.
And so, a general election was held.
The winner was… “Ardy”, the tomboy zombie.
This story is a legend of the tomboy zombie “Ardy” and her journey to lead the world to destruction.