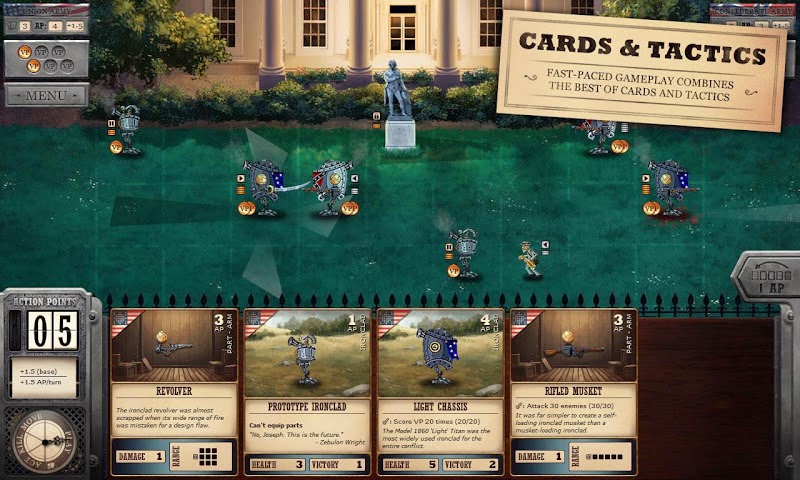 Description
Ironclad Tactics is a fast-paced, card-based tactics game set in an alternate history Civil War – with steam-powered military robots!
• No ridiculous in-app purchases! Unlock cards by playing the game, not by purchasing them separately.
• Experience unique gameplay, blending the precision of tactics and card games with the spontaneity of a fast-paced strategy game.
• Follow the campaign story through a fully-illustrated interactive graphic novel.
• Collect cards as you play through the campaign and build your own decks to crush your foes.

SCREEN SIZE NOTICE: This game was designed for tablets. Although it may run on your phone, it will probably be too small to play!
TRANSPARENCY NOTICE: Ironclad Tactics is not “free to play”; instead, the first six missions of the main campaign are available for free, after which the rest can be unlocked for around $4. After unlocking the main campaign, you’ll be able to unlock all of its missions, cards, and stories without any additional in-app purchases. Two bonus add-on campaigns are also available for around $3 each. On the PC this game costs $15, with the add-on campaigns costing $5 each, which makes the Android version a bit of a discount from the normal PC price.