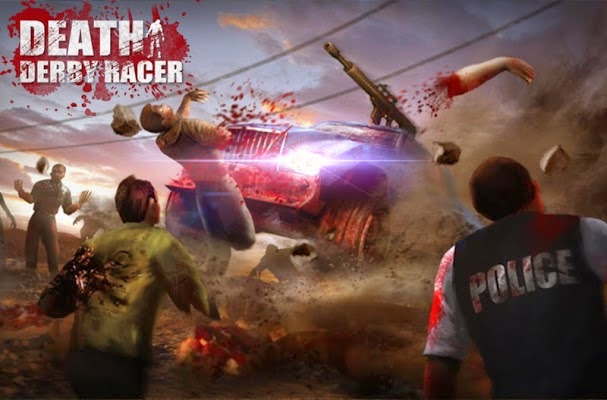 Description
Do you have what it takes to stay alive? Death Derby Racer: Zombie Race is a 3D post zombie apocalypse game. Where all you need to do is drive your way through zombie highways, zombie roads, towns and more. Drive a car from your own personalized collection, you’ve got to take out as many zombies as possible, decide if you shoot them with you’re awesome guns, or smash into them with your cars, trucks or any other mighty machinery at your disposal. The more zombies you take out or hit, the more money you will earn that you can spent on new cars, weapons and upgrades.

Fend off wave after wave of menacing zombies with HELL YEAH increasingly powerful fireworks. The game can be played in story mode and after you complete that you can play the championship mode as well. The action of this Death Derby Racer: Zombie Race unfolds across five different landscapes, from desert to the arctic, grassland, forest and mountains. Each scene has environmental hazards, like exploding barrels different type of the undead dwellers. New boom-boom weapons will be available as you progresses through the hordes of zombies and complete the different levels. This is the best zombie racing game of a lifetime. Death Derby Racer: Zombie Race is the ultimate mixer of cars, speed, explosions, blood and zombies. Sounds EPIC right, jump right into the story mode and survive as long as possible on the specially created and hill climb roads.

Death Derby Racer: Zombie Race game features:
– Can you escape from the hordes of mindless zombies, sometimes its better to save some gas then pressing it down all the time!
– This is zombie roadkill on your screen, smash your way into them or shoot them of the zombie filled roads.
– Countless hours of gameplay can be found in this fun death rally game
– Upgrade your very own vehicles with unique weapons and different components that are available in your garage.
– Like the engines, gearboxes, tires and awesome zombie roadkill bumper.
– Death Derby Racer: Zombie Race can be played on both low resolution and high end resolution devices

All in all, Death Derby Racer: Zombie Race is a super fun Zombie Road Racing game, and offers you a big amount of content for a good time, this and the on-screen carnage really pops of your screen. If you are a fan of car combat racing games and killing mindless zombies, we suggest you to check this one out today! Join the last of the human resistance in this action-packed racing game and save yourselves from the hordes of mindless zombies.