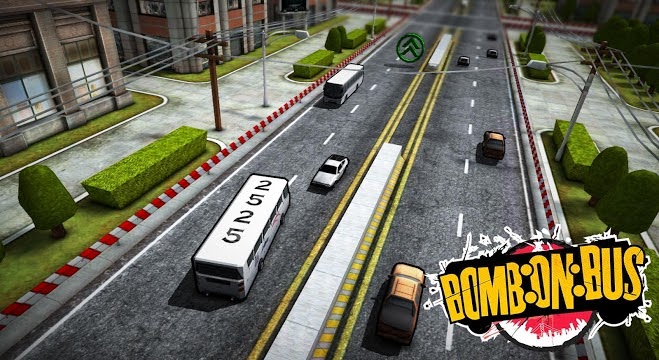 Bomb On Bus by Over Easy Games

Description
Pop quiz hot shot! There’s a bomb on a bus. If the bus drops below 50, it blows up. If any passengers try and get off, it blows up. So what do you do? Dodge, swerve, and boost your way through bustling city streets in a high-speed race for survival! How long will you last? Because at some point you’ll probably crash. Also that passenger stuff, don’t worry about them. The bus is empty, we made that bit up.

***FEATURES***
A bus, a bridge, a tunnel, a flux capacitor, an ambulance and a whole lotta action.
Full vehicle physics!
Item Upgrades!
Google play leaderboards
Google play achievements
About:
Bomb on Bus is a new fast paced game that in no way has a premise that is suspiciously similar to a certain blockbuster movie from the mid-’90s. If we’re going to throw around a fancy genre term you could say its one of those endless runners, like that Temple one or what’s his face? Or, you could say its the touching story of a bus that couldn’t slow down.
It’s pretty simple, the game begins with the titular bus reaching the driving speed of 50MPH, a bomb on board is then armed and you then need to maintain this speed or face certain explosionary doom (i.e. the bus will blow up). Using touch controls to control the err, steering matrix, and further touch controls to activate power-ups, driving a bus over 50MPH hasn’t been this much fun since the summer of 1994. Try reaching 88MPH too, you’ll never guess what happens.
Again, any similarities to persons, people, aliens, or movies starring Ted from Bill & Ted’s Excellent Adventure are entirely coincidental.